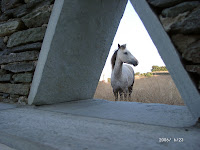 In addition to co-running Octopedal Arts, Jennifer is also a writer of fiction -- and holds an MFA in creative writing from New Mexico State University. Here is one of her stories, inspired by Donkey Boy and our summer in Greece:

If taken after sex, Wild Carrot seed prevents conception by making the uterus too slippery for the fertilized egg to implant. As she lay in bed halfway around the world on a Grecian island the American woman wondered if the seeds had the same effect on the horses munching them in the field below their house.

The horses, Alpha and Omega belonged to George Constantinos.
---

The heat subsided with the end of August; clouds threatened for the first time all summer. The thyme on the side of the road was scorched and the smell of rosemary that intoxicated in June and July gave over to the cool smell of the sea.

The horses, Alpha and Omega, carried George and a friend down the road to the Americans’ rented house two villages away. They’d offered the field in front of their house for grazing. George knew their landlord didn’t own the field but feigned ignorance could earn him a few free days of feed.

On the first of September the scowling, coffee slurping Athenians who plagued the island every August departed. They’d corrupted the island with their paddle ball games on the beach–thwack, plop–and Marlboro butts stubbed out in the sand and on the rocks. The island and its inhabitants sighed relief.

The cobbled path to the Americans was less than a mile long. The universe cautioned Omega that the path was uneven, narrow, and crowded–but it wasn’t his lot in life to make decisions.

On their right, they passed a donkey who, each week, was charged with clearing a section of his field.

As Alpha started on the path behind Omega she thought about how she hated following and looking at Omega’s backside. She unfocused her eyes and thought about the donkey. He was a mature, handsome grey donkey with an arresting black stripe running the length of his strong back and splitting off down his two front legs. Today he had a great erection. One particularly tasty blade of grass, with the breeze smelling slightly of salt and the pregnant mare clopping by had caused the swelling. Alpha liked donkeys, who were less pretentious than stallions. As they rounded the corner away from the donkey, Omega stopped to relieve himself in the middle of the path.

The sticky smell of over-ripened figs hung over the Americans’ house. 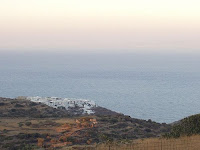 Alpha took in her new situation. From here, on the edge of the village no houses polluted the land leading to the valley: the green low point, contrasting with browning hillsides, lead to the sea. In the valley meandered a small stream that housed a few poisonous snakes and an orchestra of hidden frogs. The green swath of the valley curled past a monastery, and to the sea via a pebbly beach. Alpha believed if she could run fast enough she might be able to take flight over the valley and drift down to dip her hooves in the cool sea.

Omega knew he’d been placed in the field with a job, so he ate as much as he could.

Alpha imagined how the cool sea would feel, like a piece of watermelon amongst hay. Thoughts of the donkey made her dreamy and she lay down.

Later, she awoke disoriented, but looked around to find Omega asleep: he’d eaten a quarter of the field. She rose to walk off her sleepiness and at the edge of the field, instead of turning around to lap like she normally would, she stepped onto the stone wall and down into the adjoining field. She ran alone, finally! She ran toward the valley and thought of the sea air lifting her up -- breaking down the thousand pounds that held her to the ground. She ran fast enough to scare herself.

“Maaa!” a goat bleated and she stopped so that the momentum nearly stole her feet from under her.

Even though he was on his honeymoon, the American man suffered from insomnia. On this particular morning he went outside to water the horses. 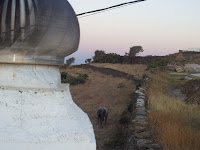 The sun wasn’t up but the sky was light and the land rolling toward the sea was dotted with shadows. Stepping outside, the American man looked toward the pasture. He peered into the shadows with his not-so-perfect eyesight and, after a moment, saw one horse in their yard and several fields away, was the mare.

Inside he mumbled something to his sleeping wife about the loose horse. Snuggled tight in the arms of Morpheus, the god of sleep, she could manage no more than, “be careful.”

The man climbed over walls of stones cleared from fields and stacked like a puzzle. He opened closed gates and trekked through crackling bramble: goatsbeard, woundwort, carline thistle, wild carrot. The sun peeked over the sea.

Roosters crowed, dogs barked, and humans stirred. Alpha stood transfixed by the horizon. The man approached, then stood with her. They looked at the sea and sky and a half dozen islands in the distance.

The man and beast walked in silence around the village. They walked by the donkey who was already up eating. The man called, “Good Morning Donkey Boy” and the donkey wagged his tail. The woman heard Alpha’s hooves clop on the walkway, and relieved her husband was okay, shook off thoughts of birth control and jumped from bed to greet him.