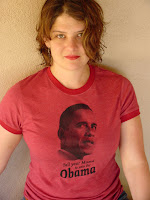 Good news! The one and only “Tell Your Mama" tee is featured in a threewalls exhibition in Chicago. Dispatch, organized by Shannon Stratton, is “a (small) sampling of the many DIY political T-shirts Americans have been self-producing in reaction to recent politics, and especially in support of favored candidates...”
We developed the “Tell your Mama...” design just after we started screenprinting. We’d been floating a lot of ideas for possible designs. It was before the Primary - March, I think - and still not at all clear how things were going to turn out. But, I guess, like a lot of us - so entrenched in cynicism, bleary-eyed from watching the world snatched from us - an idea was beginning to take hold. We might just hit the lotto with this one. It wasn't an Edwards tee or a Hilary tee. It was Obama.

The first Obama shirt was just a portrait. We were playing around with halftones and it had thick strips across his face, abstract, almost like a Maori tattoo. It wasn't political, it wasn't really meant to be anything but a cool design on a shirt and only ten or so were made.

Later, we refined the design and added the "Tell Your Mama" tag line. At first, it was for a laugh but then, as we saw people respond to it, it became something else: a statement, a campaign, the tiniest effort in a massive movement.

Only the wearers know what impact they had in their communities. We sold a bunch through the octopedalarts shop on Etsy, donated a part of the proceeds back to the campaign and gave shirts to the campaign office here in Santa Fe. They showed up at rallies around the US and, on election night and, at last, at the inauguration in Washington, DC.
Posted by Octopedal Arts at 1:07 PM 1 comment: